Today I wanted to share with you a list of things you should know before going to Thailand. I was aware of some of these before I arrived in Bangkok, while others were a more of a shocking surprise once I got there.

1. Eat off your spoon, not your fork. Eating directly off a fork is considered crude; instead, use your fork to push food onto your spoon.

2. Yes, the people really are *that* nice. Don’t be surprised if strangers offer you advice or strike up a conversation with you.

3. People don’t stand in lines. This took me a few days (and many long waits for the ladies room) to figure out. Instead of queuing up, Thais form a crowd. Stand your ground, and get used to a lack of personal space in public places.

4. Take tuk-tuks during the day and taxis at night. Taxis are more comfortable, but tuk-tuks give you a better view. Both are terrifying. If you go to Patpong road at night (Bangkok’s equivalent of the Red Light District), ask your taxi to come back and pick you up at a certain time. Otherwise, you’ll have a hard time fighting all the other drunk people to find a ride back to your hotel. 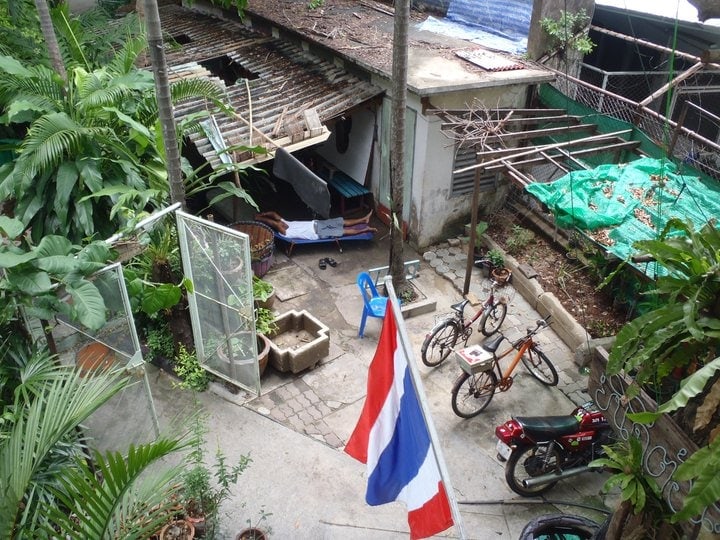 5. Don’t talk about the king. Seriously, not a word.

6. Gambling is only permitted on certain days (by order of the king, whom you are still not talking about, right?). Hit up the horse tracks on a pro-gambling day for an awesome experience. Prepare for lots of yelling, drunk people, and general debauchery.

7. Eat as many mangoes as you possibly can. The mangoes in Thailand are the most delicious in the world.

8. Cover up your elbows and knees when visiting temples, wats, monasteries, palaces, etc. I’d recommend bringing along a light jacket or cover-up even on days when a temple isn’t on the itinerary — you never know when you’ll stumble across a beautiful wat you’ll want to check out! 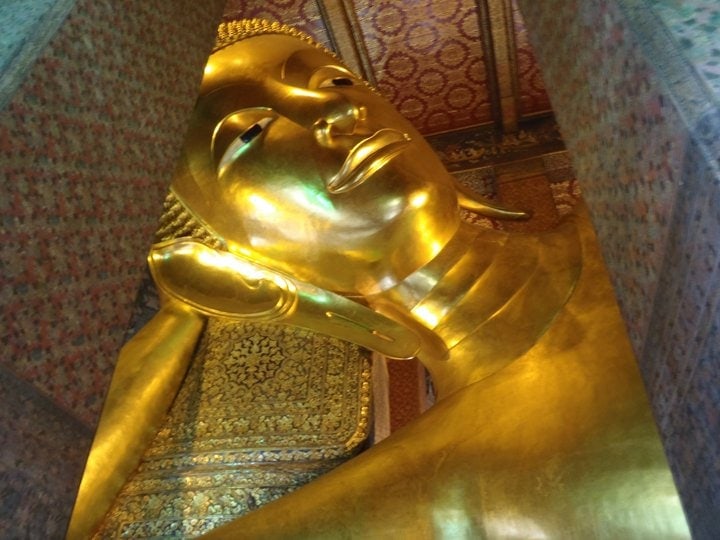 9. Many of the popular beer brands also make bottled water. If you order a “Chang” or “Singha,” the waitress will likely respond “Chang beer?” to clarify. Make it easy by ordering “Chang water” or “Singha beer” to begin with. As a side note, I’ve tried doing this in Thai restaurants back home and I just get weird looks. Go figure.

10. Don’t take a taxi driver’s word on it if they say an attraction or site is closed for the day; many times they will use this tactic to try to “suggest” other destinations which earn them a commission. If in doubt, just thank them for the information and ask another driver.

11. Use public transportation. The BTS (Subway) and MRT (Light Rail) are cheap, convenient, and fast. You can get just about anywhere using these systems and they are really easy to use. The maps make sense, the token system is efficient and simple, and the trains are kept very clean. Get a day pass to save extra money.

12. You will see some roaches. Some days I saw none, other days they were crawling over my feet while I was trying to drink a mojito. Yeah, they are a little gross, but it’s not a deal-breaker. Better than rats, am I right?

13. The best-dressed woman on any given train, boat, or sidewalk is probably a ladyboy. I say this without meaning offense to Thai women, who are absolutely gorgeous but as a compliment to the styling prowess of ladyboys.

14. Stay in a five-star hotel. You’ll be hard pressed to find a better deal at a top-of-the-line hotel than in Thailand. We stayed in some fabulous hotels for around $100/night — some came with our own private infinity pools. 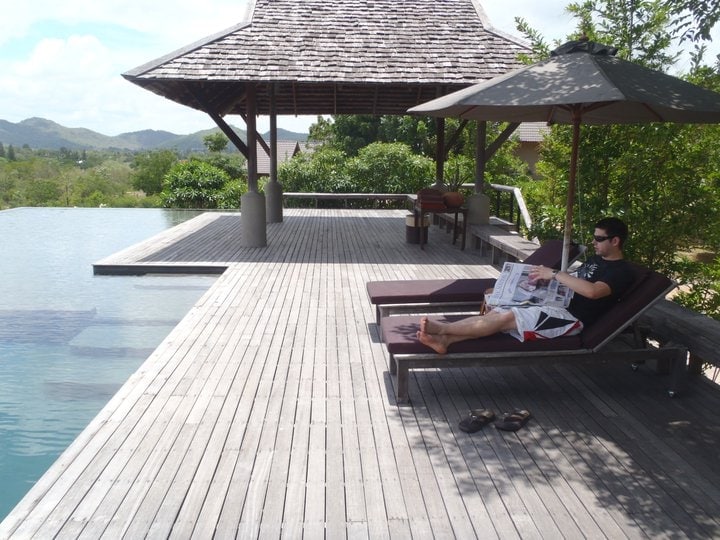 15. There are lots of smells. Walking down a street in Bangkok you can smell fragrant jasmine and pungent sewage on the same block. It is quite arresting, but something that you’ll remember fondly in the future.

16. The ice used in Thai restaurants is fine to drink. If you’re somewhere far outside of town and worried about the ice, just get bottled water or beer instead.

17. Learn a few basic phrases in Thai, but know that English is widely spoken in Bangkok and most everyone is friendly enough to put up with a little pantomiming. A humble and respectful manner will get you far in the land of smiles! 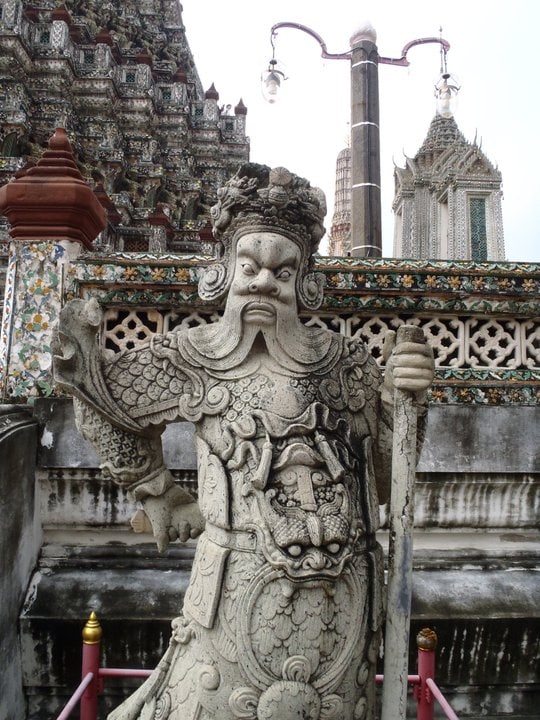 18. Carry your own tissues and hand sanitizer if you’re not comfortable air drying or using a spray hose next to a squat toilet. Most places we went had “Western” toilets (sometimes called “sitting toilets”), but I encountered my fair share of squat toilets, too. My advice to the ladies: take a deep breath and pretend like you’re camping. You can do it. Oh, and wear shoes with non-slip soles because those bathroom floors are WET.

19. Check out a Muay Thai fight at Lumpinee Stadium, but don’t get suckered into buying “VIP” tickets. They are about two feet away from the regular seats and cost four times as much. 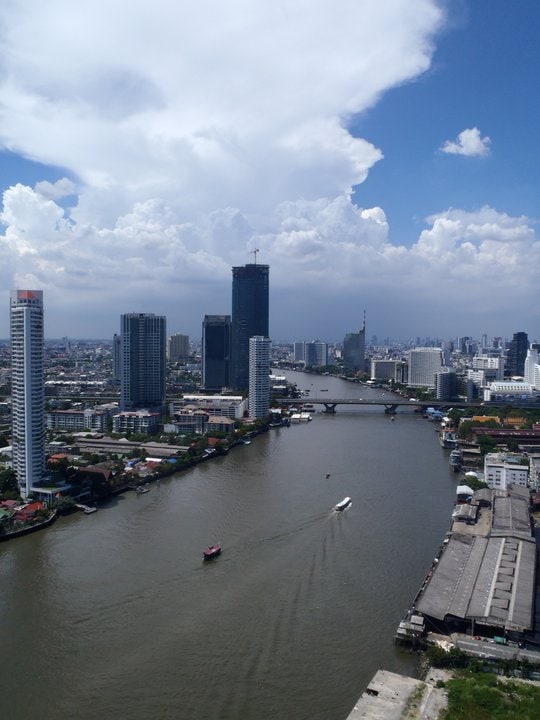 20. Pick a hotel close to public transportation (MRT and BTS). The Sukhumvit neighborhood is especially practical, as the MRT and BTS both have stops just a few blocks apart.

21. When visiting a temple, pay attention to see if others have taken off their shoes. If so, follow suit.

22. Get massages. Like, five or six per day. They are fabulous and so inexpensive you’ll never again be able to justify paying $100 for a massage back home. Three bucks for an hour long foot massage? Yes, please.

23. Avoid massage parlors with signs that read “nice girls,” “happy girls,” or just any mention of girls or women. Unless you are actively looking for a brothel.

24. There are 7-Elevens  EVERYWHERE. I kid you not, there are probably more 7-Eleven’s in Bangkok than there are Starbucks in Seattle. You can find some really interesting stuff in them, too. I tried this strange quasi-red bull looking drink and it made me feel weird. Very awake, but very weird. 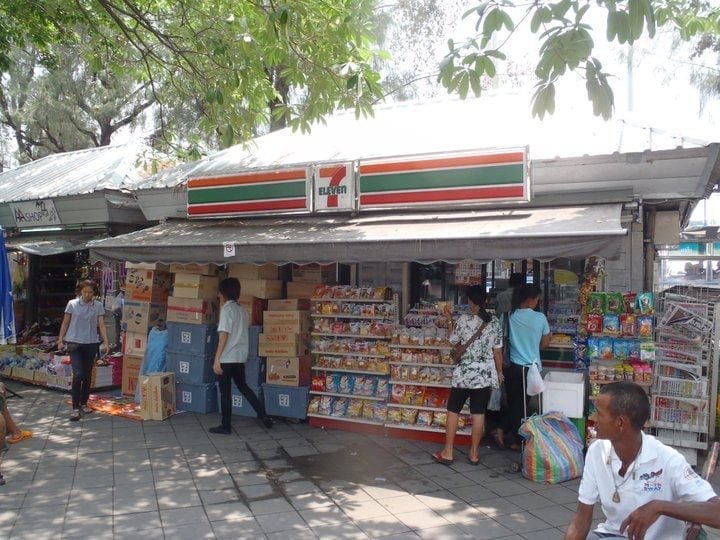 25. Have a suit or dress made while you’re in Bangkok. You can have one tailor-made to fit for a fraction of what it would cost in the states. Just don’t get tricked into going to a sub-par “fashion store” by your taxi driver. Do some research ahead of time to find a reputable tailor.

26. Find a hotel that offers complimentary breakfast, but don’t waste your money on an all-inclusive meal package. There are too many great places to eat (for cheap!) in Bangkok to waste stomach space on hotel food for three meals per day. I love a good Western-style breakfast, which can be hard to find in Bangkok, so I was happy that my hotel served croissants every morning. 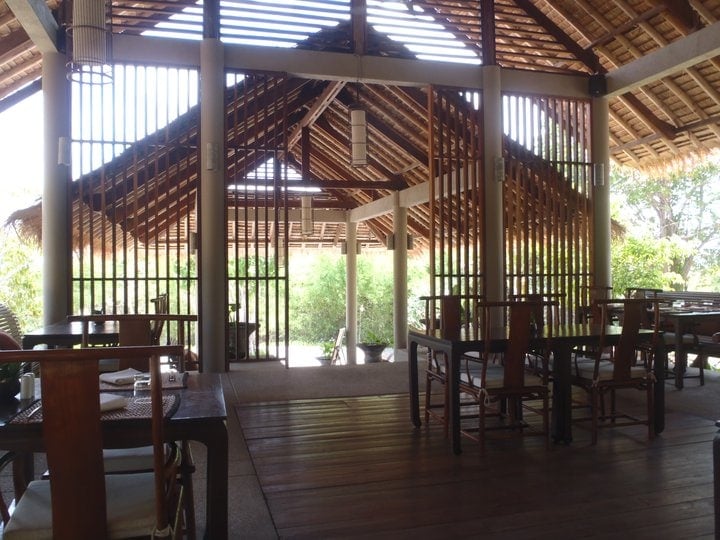 27. Don’t go in April (like we did). It’s the worst time of year to go, because the humidity is at about 300%. Or, if you can handle like (like we did), it’s the cheapest time to go in terms of airfare and hotel rates. There are also far fewer tourists this time of year.

28. Do your research before visiting the zoo. You’ll see lots of weird animals you didn’t know existed, but you’ll also be shocked at the conditions the animals are living in. I went to the zoo without really thinking about it, but I would’t visit a second time. Same goes for riding elephants — you might look into visiting an elephant reserve or sanctuary instead. Oh, and there’s a 7-Eleven at the zoo. 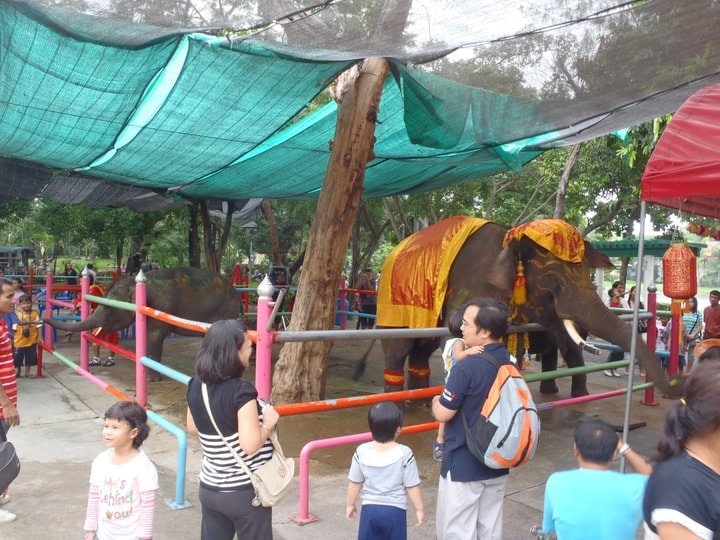 29. Show respect for Thai customs by greeting others with the Wai (placing hands palms together at your chest and bowing your head).

30. Don’t expect the food to taste like the Pad Thai you order back home. It’s delicious and incredible, but it’s not like the Americanized version. Find a place packed with locals and you’ll be fine.

31. Order several dishes at dinner, but don’t expect all the food to come out at the same time. Bringing out all plates at once, Hell’s Kitchen-style, is a very Westernized concept. In Thailand, food comes out as it is ready. Plus, since you can order a five course dinner for just a few dollars, you might as well go for it.

32. Don’t drink the water. Buy bottles of water from street vendors for about ten cents a pop. Or, buy beer on the street for a dollar a bottle. 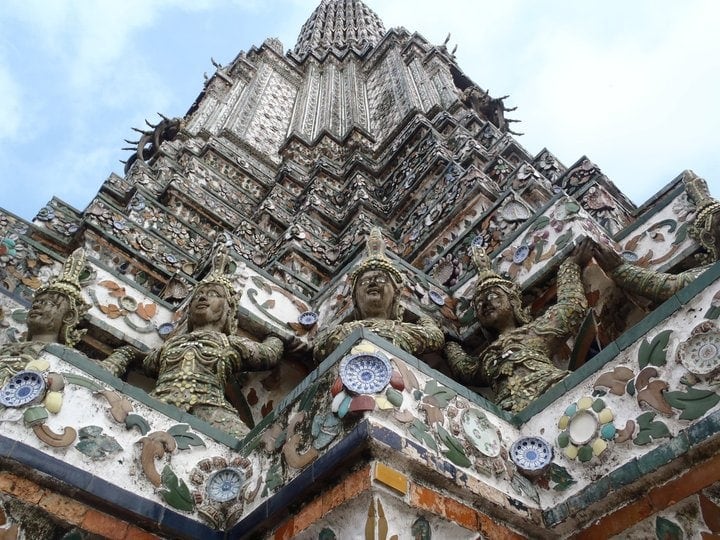 33. Don’t touch anyone on the head. I’m not sure why you would do this in any country, but either way, the head is considered sacred in Thailand and shouldn’t be touched. Oh, and try not to point your feet at others, either. This is somewhat impossible to accomplish on the subway, but if you are sitting directly across to someone while talking, point your feet off to the site a bit to avoid being disrespectful.

34. Be careful what you order at food carts. If you see cats walking across the produce, you probably shouldn’t eat there. If you can’t see them actually making the food, find a different cart. If there are no locals in line, keep moving. 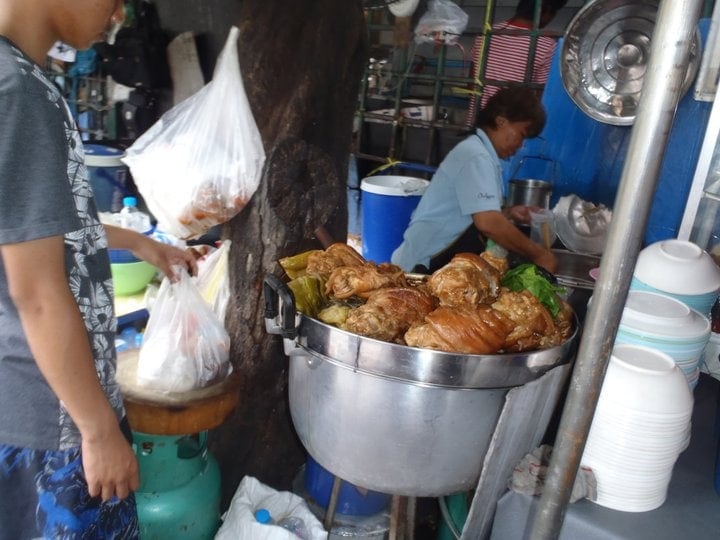 35. Don’t eat the pretty radishes. Or tomatoes, or cucumbers. If someone hand-carved that garnish, it could be covered in bacteria.

36. Eat a croissant. Or ten. Seriously, they were better than the ones I had in France.

37. It’s okay to negotiate prices with your Tuk Tuk driver. Be wary if they try to convince you to go anywhere other than your destination (usually jewelry or fashion stores that are having “special sales” – the goods are fake, and the driver earns commission for taking you there). 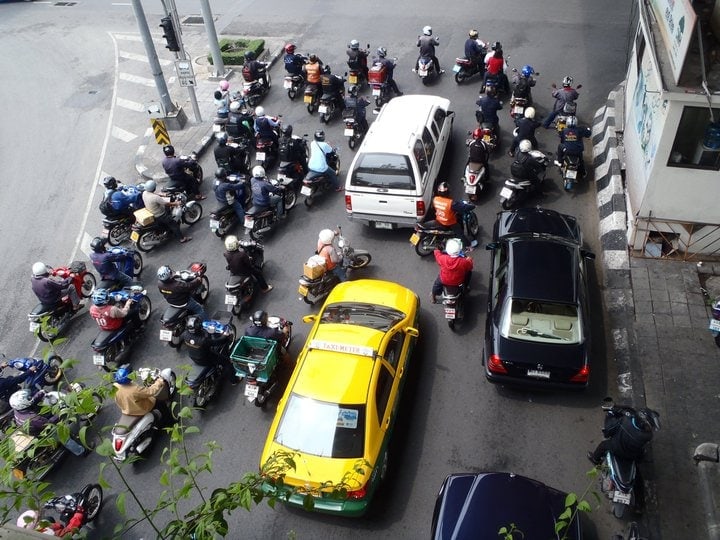 38. Bangkok Belly is a real thing. Just ask my poor husband, who spent the entire flight home alternating between fever, chills, and vomiting. I warned him about those radishes.

39. Yes, those signs on Patpong Road do say “Ping-Pong Show.” I’ll leave it at that.